Claudio F.Baroni is a composer specialized in experimental music. His work can be described as a systematic approach oriented towards investigating the nature of sound and the passage of time.

Baroni has also collaborated in many multimedia projects with artists from different disciplines including Reinaldo Laddaga, Fabian Marcaccio, Adi Hollander, Joost Rekveld, Prannet Soi and Ana Piterbarg, among others.
Recent honors include an artistic residency fellowship from Civitella Ranieri Foundation in Umbertide, Italy.

He studied piano and sonology at the Universidad de Humanidades y Artes de Rosario, Argentina, and composition at the Royal Conservatory in The Hague, the Netherlands with Gilius van Bergeijk, Clarence Barlow, Martijn Padding and Louis Andriessen.

Baroni lives and works in Amsterdam, The Netherlands. 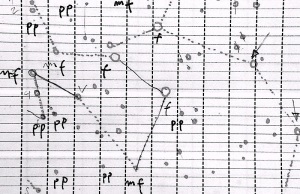